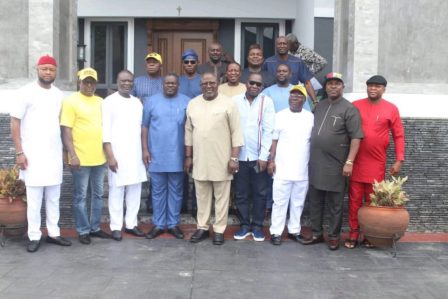 Peoples Democratic Party members of the Delta State House of Assembly, on Thursday, reassured a foremost governorship aspirant in the state and the Speaker of the House, Rt Hon Sheriff Oborevwori of their total support for his gubernatorial ambition.

Ochor who spoke on behalf of the members of the House said that they are committed to the realization of the governorship ambition of the Speaker.

“Your Governorship ambition is a divine project, it is the project of your colleagues in the House and since it is a divine project, God will sustain this project. We are in this project with our constituents. We are fully prepared for the May 23rd, 2022 PDP primaries in the State in all our Constituencies. The Delta State House of Assembly is intact, it is one big family and we are dedicated to your dream of becoming the next Governor of Delta State”, he added.

Responding, the frontrunner Governorship aspirant in the State, Rt Hon Sheriff Oborevwori, said that he was elated with the visit of his colleagues.

According to him; “I am highly impressed with this visit and I cannot thank you enough my dependable and reliable colleagues. My strength today is in the Delta State House of Assembly, because of your uncommon love for me”.

The Speaker also said that; “You have taken my Governorship ambition as a priority. God gives power and I know that God will give us victory at the end of the day”.

In a brief remarks, the member representing Ika North East Constituency, Hon Anthony Elekeokwuri, said that the visit was to show their total solidarity to the Speaker of the Delta State House of Assembly, Rt Hon Sheriff Oborevwori on his quest to become the governor of Delta State in 2023.

On his part, the member representing Aniocha North Constituency, Hon (Engr) Emeka Emmanuel Nwaobi, prayed for total victory for the Speaker in the forthcoming PDP primaries as well as the 2023 Delta State Governorship election.