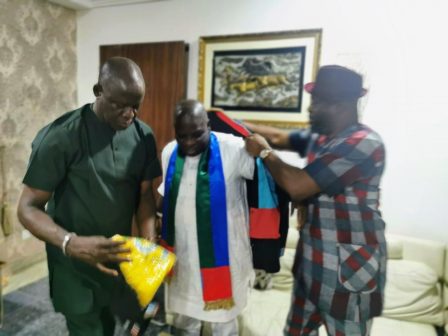 Former third term member of the House of Representatives and Senatorial aspirant of the People’s Democratic Party (PDP), Hon Daniel Reyenieju, has been dressed and decorated with All Progressives Congress (APC) robes, a sign that he has fully pitched tent with the party.

It would be recalled that Hon. Daniel Reyenieju, a dedicated member of the ruling People’s Democratic Party (PDP) in Delta State, recently dumped the party that gave him the platform to the House of Representatives for the APC, over what he described as deviation from core values that his former party was known for

The decoration exercise was carried out by the Delta South Senatorial District candidate of the All Progressive candidate, Hon. Joel-Onowakpo Thomas, who is working tirelessly to ensure a smooth sail for his political party in the forthcoming general elections.

Hon Reyenieju, an Itsekiri and Niger Delta born leader, speaking at the ceremony witnessed by mammoth crowd of APC faithful, vowed to mobilise massively for for his new party and ensure that the APC wins overwhelmingly in all elections.

He said the PDP was no longer a home for its members and has deviated from its core objectives, hence, the urgent need to join APC to rescue Delta State from collapsing.

Hon. Joel-Onowakpo while decorating the political actors, described them as people who have very vast experience in politics, adding that he was convinced beyond reasonable doubt that their entrant into the party has added so much boost to the ever rising popularity of the APC which will eventually turn to electoral victory for all APC candidates.

The visibly joyous APC Delta South Senatorial District candidate while appreciating his supporters for the job so far done, appealed to all APC members not to relent in their determination to secure victory fall candidates of the party.