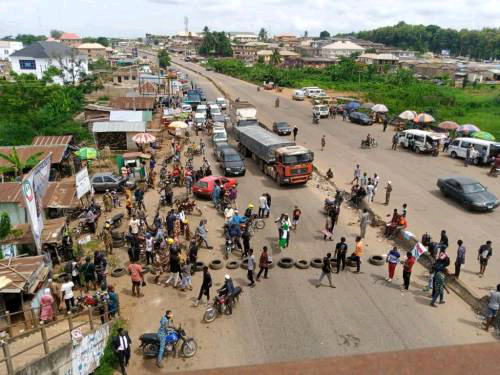 BY SAHARAREPORTERS, NEW YORK
Scores of students of Obafemi Awolowo University, Ile-Ife, Osun State, have blocked Ife-Ibadan Expressroad as they protest against the lingering industrial action embarked upon by the Academic Staff Union of Universities (ASUU).

The students who initially gathered at their campus gate on Thursday morning moved to the highway which connects Ife, Osun State to Ibadan, Oyo State.

The PUNCH reports that the students, who converged under the backing of the Fund Education Coalition, pledged to hold protests till the day their demands would be met by the Nigerian government.

They displayed placards bearing various inscriptions like “Fund Education Now”, and “Education is not a Scam” among others, as they shouted in unison “End ASUU Strike”.

ASUU embarked on a nationwide warning strike on February 14 and has continued to extend it towards pressing home its demands.

Its demands include the revitalisation of public universities, payment of earned academic allowances and the deployment of the University Transparency and Accountability Solution (UTAS) for payment of university lectures