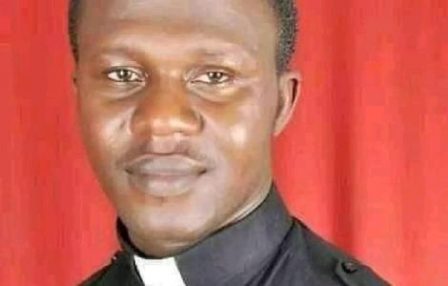 A Catholic Priest, Rev Fr. Joseph Aketeh Bako, has died in the hands of his abductors eight weeks after he was abducted.

It would be recalled that late Rev. Fr Bako was kidnapped from his residence in Kudenda community of Chikun local government area of Kaduna State on March 8, 2022.

The Chancellor also disclosed that late Fr. Bako had died between April 18 and 20, 2022.

“Fr. Joseph (aged 48) was kidnapped from his residence, in St John Catholic Church Kudenda, where he was serving as Parish Priest, on the 8th March, 2022,” he said.

According to the Chancellor, Fr. Bako was ill before the abduction and his abductors didn’t allow him to go with his drugs.

“We have not recovered his corpse but we have confirmed his death, people who were kidnapped together saw him died.”

He further added that the Catholic Archbishop of Kaduna, Most Rev. Matthew Man-Oso Ndagoso, has communicated his deepest sympathies to Fr. Bako’s immediate family and the entire Catholic Community of St John Kudenda; and assured them of his fraternal closeness and prayers.