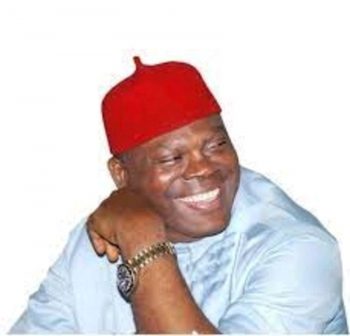 Hon. Nicholas Ossai
ASABA/Nigeria: A new group, known as Movement For Equity in Ukwuani axis of Delta State, has x-rayed the political scenario in Ukwuani/Ndokwa Federal Constituency and asked delegates in the People’s Democratic Party (PDP) to be wary of any candidate that is running for fourth term.

In a press release signed by Comrade Chukwudi Okonye for Ndokwa West, Ifeanyi Opone (Ukwuani) and Ogochukwu Enebeli (Ndokwa East) respectively, the group said they are out to ensure that the seat of the House of Representatives was rotated among the three council areas.

According to them, it is time for either Ukwuani or Ndokwa East to produce the next candidate in 2023, as the incumbent from Ndokwa West local government councils had been there for three terms.

The statement read in part, “Our argument is that Ndokwa West that produced the incumbent elective office holder, Hon. Nicholas Ossai who has occupied that seat since 2011. So, it will be unjust to allow him stay beyond next year. Giving him a fourth term ticket will be injurious to the future aspiration of both Ndokwa East and Ukwuani local government areas and will not also augur well for the promotion of unity and brotherhood among the three local government areas.

“It’s imperative for Hon. Ossai honourably step down, but if he refuses to step down, the delegates should vote him out. Even if he brings huge sum of money to influence their votes, they should take it because it is the proceeds of the constituency projects that he failed to utilize over the years. It is not his personal money.”

The group stated that part of the reason they are opposed to Ossai Ossai was that he has nothing to show for his 12 years in the House of Representatives as they described his tenure as “a barren period of representation hence our area has become the laughing stock among the ten federal constituencies in Delta State”.

“What has Ossai done for the people? Can he name one tangible project he has facilitated or executed? It is from the IPP project in Okpai that Obosi, Anambra State, gets part of its light, but Ndokwa area has been kept in perpetual darkness. The IPP project was commissioned in 1988, but three decades after, there is no step down transformer in the federal constituency.

The group compared the lawmaker with the Biblical fig tree, which they advocated should be cut down for not producing any fruit.

“Our interest in PDP is that we know for a fact that PDP will produce the next House of Reps Member because of the popularity of the party in our area. But in so doing, a credible person with a pedigree who can be relied upon and also accessible, unlike Ossai who only gets ticket and runs away till another election. He only gets ticket, runs away and returns back four years later. We don’t want a representative who keeps talking about graduating as a ranking member before constituents can reap the rewards of his representation. For him to have been there for 11 years and he could not impact the lives of the people positively, is it when he has spent 28 years there?

“There are people who have spent just a term or two terms, and you can also verify their achievements. Go to Urhobo land, Ijaw and other places in Delta State, why must ours be different?, the group queried.

“We hereby plead with delegates to be conscious when making their decision. They must not sell their votes because of monetary inducement. Doing so will mortgage out collective future and the future of our generation.”

Efforts to reach Hon. Ossai proved abortive as repeated calls to his phone rang out.

A subsequent text on the subject matter sent to him was not replied to as of the time of filing this report.

The text read in part, “Hon., there is a press release sent by Movement For Equity in Ukwuani axis of Delta State, decrying your quest for fourth term which they say will deny other parts of the federal constituency, equity and fairness in representation. In fact, they specifically questioned the rationale behind your fourth term quest”. Please, respond. Thanks.