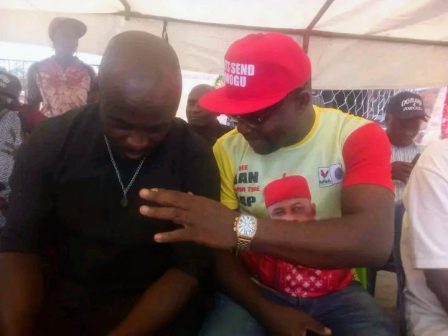 BY SUNNY A. DAVID

The All Progressive Grand Alliance (APGA) Leader in Ogbaru Local Government Area and Commissioner for Information, Anambra State, Hon. Sir. Paul Nwosu made the assertion while speaking at the campaign Council meeting at Onuiyi Haven, Atani.

The Commissioner described APGA Candidate for Ogbaru Federal Constituency, Hon. Arinzechukwu Awogu as most acceptable and vibrant, whose performance as Local Goverment chairman he is worthy of emulation.

Therefore, we need to give him our maximum support because he will not disappoint us instead, will perform better and more than we will expect, if elected as our representative.

While corroborating Sir Paul Nwosu’s, acknowledgement of Awogu’s capability, the Ogbaru Local Government Chairman, Hon. Paschal Aniegbuna, said that it is time for APGA to take back what belong to them since APGA is now stronger and more united.

He urged all APGA members to maximize and redouble their efforts and strength in supporting Hon. Awogu and other APGA candidates.

APGA Chairman in Ogbaru Local Government Area, Hon. Nnamdi lfejika, added his own voice and said that Hon. Awogu deserve collective support from every nook and cranny of Ogbaru and remain the most capable and marketable candidate.

Pastor Onochie Obiora, in his speech, expressed confidence that Hon. Awogu and other APGA candidates will emerge victorious in next month election.

Hon. Arinzechukwu Awogu, in his reaction thank members for the overwhelming support being given to him and assured them that he will not disappiont.