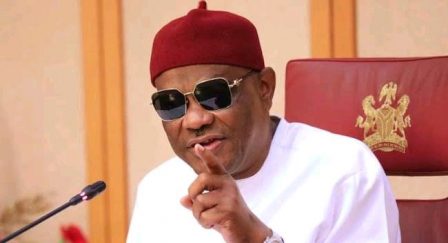 The Governor of Rivers state has come out to say that he will not work together with anyone who fails to keep their promises ahead of the presidential election.

Wike disclosed this during a rally of the Rivers state Peoples Democratic Party, PDP in the Ikwerre Local Government Area of the state and according to him, he is not concerned about the abuses being thrown at him by people hiding behind the cover of the media and the day that his sack from the PDP is announced, the consequences of that will not be favourable.

“If we agree something with you, can you keep to it? If you cannot keep your promises it’s bye bye to you. They said they will sack me, I’ve been waiting patiently. The day they will announce my sack then they will know that Khaki is not leather.”

“It’s not to go undercover to the media and use their television houses and electronic devices to abuse us, don’t worry about these abuses. Let them come and say it out loud. You know that you can’t joke with Rivers people, say it out loud and see what happens.”