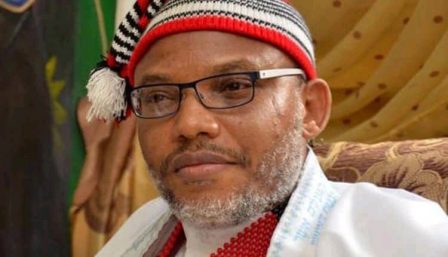 By Fadehan Oyeyemi
Justice Binta Nyako of the Federal High Court in Abuja has refused to admit the leader of the Indigenous People of Biafra, IPOB, Nnamdi Kanu to bail.

The judge held that Kanu must account for his whereabouts for years when he was first granted bail but refused to attend court for trial.

The court disagreed with the defendant that he escaped out of the country when a retinue of armed soldiers allegedly invaded his ancestral home in Abia state.

The Federal Government has withdrawn the newly amended charges against the leader of the Indigenous People of Biafra (IPOB), Nnamdi Kanu after the Federal High Court sitting in Abuja rejected his request for breaching previous privileges accorded him.

Upon withdrawal of the newly amended six-count amended charges by the central government, the court presided over by Justice Binta Nyako struck out the charges preferred against Kanu and maintained that the bail applications would also not be granted.

Nyako said that Kanu would have been granted his request but previous privileges were misused by the IPOB leader which further resulted in his rearrest and repatriation to Nigeria.

The judge’s ruling at the court on Wednesday came after Kanu’s counsel, Mike Ozekhome, complained that the government was trying to delay processes by continuous amendment of the charge against the IPOB leader and that the newly amended charges were the seventh time the Federal government embarked on same actions.

Nyako, who agreed with Ozekhome’s submission, stated that Kanu was not expected to take a plea on those newly amended charges immediately, as he needs time to digest them before doing so.

According to her, Kanu breached his former bail conditions, and until that has been heard, his present bail application remains immature and cannot be granted.