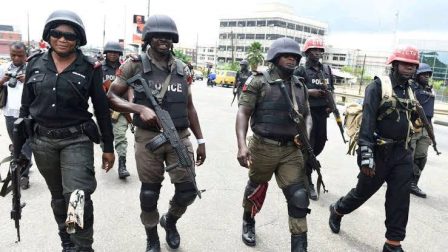 From Paul Osuyi, Asaba
Confusion on Tuesday trailed the collapse of the perimeter fence of the custodial centre at Agbor in Ika South Local Government Area of Delta State.

The fence gave way on Monday evening during a stormy weather that resulted in downpour in the area.

Locals of the town claimed that scores of inmates at the correctional facility escaped as a result of the collapsed wall before the situation was brought under control with the deployment of a combined team of gun wielding security operatives.

But the Public Relations Officer of the state command of Nigeria Correctional Services (NCS), Allen Iloba said no inmate escaped from the facility.

Iloba who confirmed the collapse of the wall to our correspondent in Asaba, also said no casualty was recorded as a result of the incident.

He said the windy storm that blew off the fence occurred at about 4.pm when the inmates had been locked up in the cells.

“When there is such storm, we usually lock up the inmates. So they had already been locked up in their cells, and when the rain came with the terrible storm, the left side of the perimeter fence gave way, it fell down. The inmates were in their cells when the fence fell.

“Men have been drafted, we have men of the Nigerian Army on ground. We equally have operatives of the Nigerian Police Force, to complement the efforts and number of our personnel.

“We also have the conventional staff that you know before, they are on ground.

“That place is properly covered, the security there is water tight. Everything is under control, we are on top of the situation,” he assured.

However, some expressed anxiety die to the overwhelming presence of stern looking security operatives.

“The wall of the prison fell during Monday evening rain. And they said some inmates escaped.

“As I speak, there are heavy security presence including army, police and other operatives.

“People are now very cautious in Agbor to avoid incurring their wrath,” a source volunteered.