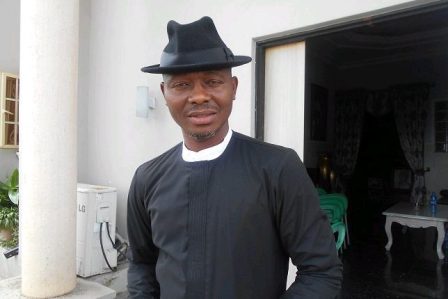 Chris Ekiyor
UGHELLI – It was a political tsunami at the weekend in Patani Local Government Area of Delta State as a stalwart of People’s Democratic Party PDP, a former National President of Ijaw Youth Council IYC Chief, Dr. Chris Ekiyor dumped PDP and led over 5000 of his followers across the State to the All Progressive Party APC.

Ekiyor speaking Patani on behalf of his followers after being presented with the broom by the representative of Deputy Senate President Ovie Omo-Agege, Elder Omene Sobotie, Chairman APC Delta State, said he decided to take this bold to disassociate himself the PDP which he said was known rewarding only family members after elections.

He condemned the PDP for playing household politics of recognizing and rewarding wives, children, brothers with juicy appointment while the others are treated like orphans and to settle with peanuts.

Ekiyor who is a former commissioner of Commerce and Industry reiterated that democracy is about the people, any society where there is no voice of the people, is no democracy noting that the Delta State PDP does not value brains but always settled for mediocrity.

The ex-IYC helmsman further criticized the Governor Ifeanyi Okowa led administration of the State for allegedly under developing the Ijaw speaking Areas of the State despite the huge sacrifice the Ijaws made for his emergence as the governorship flag bearer in 2014.

“If you cannot link up Ayakoromor to upland, cannot connect Ogulagha, Gbaramatu to upland, you have done nothing to us but a total failure to the Ijaw nation.”

“Today I have decided to come back home with my followers from Patani, Bomadi, Burutu, Isoko South, Isoko North, Ughelli North, Ughelli South, Aniocha North, Warri South, Warri South-West ,Warri North Council Areas of the State to join the APC to take over the State in 2023 for a more Developed and better Delta State”.

DSP Ovie omo-Agege in speech thanked Chris Ekiyor and his followers for taking the bold step and tasked them to be steadfast and be watchful of the antics of the PDP.

He further admonished them to resist whatever tactics of the PDP and ensure that they defend their votes during the elections. DSP called on the party supporters to register and get their PVC which he said was the only instrument to use to kick out the PDP from Dennis Osadebe House Assembly.