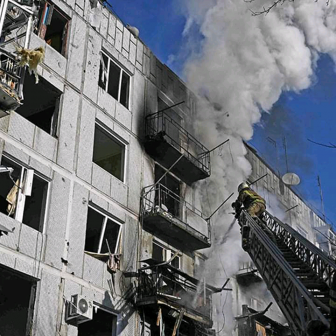 Russian forces have launched attacks on several cities in Ukraine, leaving many dead and properties destroyed.

More smoke seen rising over the Ukrainian defence ministry intelligence headquarters in central Kyiv which we told you about a short while ago.

BBC reports that the building appears to be intact, and the smoke actually appears to come from a large fire next to the building. Witnesses have seen uniformed people throwing bags on to the fire.

Ukraine says some of its military command centres have been hit by Russian missile strikes.

Just outside Kyiv, in the town of Brovary, authorities say at least six people were killed by a series of missile strikes.

United Kingdom Prime Minister, Boris Johnson says that after 04:00 GMT he spoke to President Zelensky of Ukraine to offer the support of the UK.

He says our worst fears have come true and all the warnings of a Russian invasion have proved tragically accurate.

President Vladimir Putin of Russia has unleashed war in Europe, he says. He says Putin has attacked a friendly country without any provocation or credible excuse.

Bombs have been raining down on an entirely innocent population, Johnson continues.

“A vast invasion is under way by land by air and by sea.”