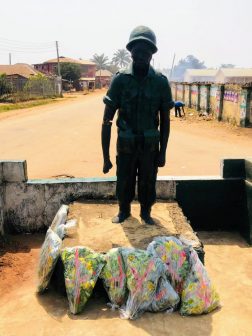 Armed Forces Remembrance Day, an annual event to commemorate Nigeria’s servicemen and fallen heroes, was on Sunday celebrated in Ogwashi-Uku, headquarters of Aniocha South Local Government Area, with reflections on the significance of armed forces in the country.

The Secretary to the Local Government, Prince Emordi Okonjo onbehalf of the Coucil chairman, Pastor Jude Chukwunwike, laid wreath and stood for the parade at the Ogwashi-Uku Arcade.

He was joined by Leader of the Sixth Legislative Arm, Hon. Leonard Nzemeke; Deputy Leader, Hon. Ugochukwu Ikeikwuni; Deputy Majority Leader, Hon. Lucas Nwadei and other councilors as well as Heads of Departments and security captains.

Prayers were said for the fallen heroes while the living were encouraged to remain steadfast in the cause of putting their footprints on the sands of time.

In his tribute, Chukwunwike commended the efforts of the service men, describing it as the sacrifice which preserved the country’s unity.

“As you all know, the protection and maintenance of territorial integrity of a nation depend very much on the quality of her Armed Forces. In the course of pursuing world peace and the struggle for the defence and maintenance of territorial integrity of our nation, Nigeria, many of our soldiers made various sacrifices. Some lost their lives and others maimed for life”, Chukwunwike said.

Similarly, the Leader of the Sixth Legislative Assembly, described the event as laudable, stressing that the living can, to a large extent, draw inspiration from the laudable records of the fallen heroes.

“Let us draw inspiration from this occasion and remember that one day we all will be no more. Our only legacy is the service of love to humanity”, Nezemeke said.

Fuel Will Be Made Available, Affordable In Two Weeks – IPMAN