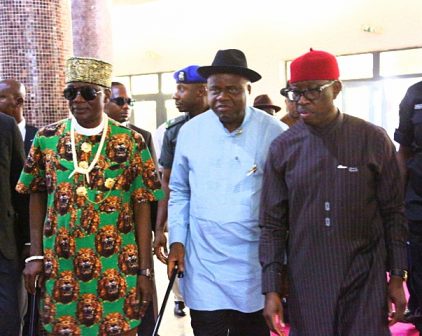 Vice Presidential Candidate of the Peoples Democratic Party (PDP) and Governor of Delta, Sen. (Dr) Ifeanyi Okowa, on Wednesday, said agitations against the use of BVAS technology in the forthcoming general elections in the country and subsequent ones amounted to pushing Independent National Electoral Commission (INEC) to disobey the Electoral Act.

He said that the use of BVAS and other devices to enhance e-election process in the country was contained in the Electoral Law, and that INEC would be committing an offence if it hearkened to the negative agitations.

Okowa made this known at the opening of a two-day Extra-Ordinary General Assembly of the South-South Monarchs’ Forum held at DSP Alamieyeseigha Banquet Hall, Government House, Yenagoa, Bayelsa.

He called on those against the use of the technology (BVAS) to eschew sentiments and join other Nigerians to support INEC in delivering free, fair and credible polls.

Okowa, who is also the Chairman of South-South Governors’ Forum, noted that Nigerians were governed by laws, explaining that the Electoral Act was quite explicit on the use of BVAS as far as the electoral process in the country was concerned.

He urged INEC to abide with all laws on election in the country and not to allow any selfish and unprogressive interest to derail it.

According to him, most Nigerians are unfortunately poor, such that their minds are easily dissuaded in the choices that they make, but we urge that they should make well-informed choices so as to move the country forward.

“The public needs to be properly educated and we thank INEC which had continued to try to educate the public concerning the elections.

“We also thank the National Assembly and President Buhari for being able to sign the new Electoral Act that allows a process for a more likely credible election than we have had in the past,” Okowa said.

The PDP Vice-Presidential Candidate also lauded  Buhari for repeatedly making a strong commitment in leaving a legacy of credible election in Nigeria.

He charged the security agencies to key into the president’s vision of a credible polls by remaining apolitical in the discharge of their responsibilities.

“The president has repeatedly assured Nigerians that there will be free, fair and credible elections in the country and we hope that the security agencies will key into that assurance,” he stated.

Okowa deplored what he called “physical and social media bullying” in the nation’s political space by some political actors and their supporters, and called on various sub-national governments to allow democratic process to thrive in the country.

He said that the agencies should allow political parties to campaign in their respective states without any hindrance.

“We must be civil and communicate the truth to the people. You must give space to any political party to campaign freely without being harassed.

“I think l need to speak to my colleagues across the nation through this medium that there is the need to truly allow democracy to thrive and the political space must be allowed for any political party to participate freely without being intimidated by the state government or by other forces around the state government,” he added.

The governor disclosed that traditional rulers played important roles in their respective communities as the custodians of their culture and tradition, and that it was important to give greater constitutional roles to them.

He called on Nigerians to remain hopeful in spite of the challenges in the country, adding that traditional rulers should always communicate hope to the people.

In his address, Bayelsa Governor, Senator Douye Diri, said that the Extra-Ordinary General Assembly of the Monarchs in the region was a well-placed moment to interrogate the nation’s numerous challenges, and to have a frank conversation in the context of the South-South relationship with other regions.

According to Diri, the paradigms of such interrogation include but are not limited to – Restructuring, Fiscal Federalism, Devolution of Power to the states and the creation of state police.

“In the forthcoming elections, we must all do our best to prevent our youths from being used as cannon fodder to satisfy the desperate ambition of political office seekers,” he added.

Delivering a Keynote Address, Chief Anthony George-Ikoli, posited that to adequately consummate a strategy for entrenching security and peace at the grassroots during the 2023 general elections, traditional rulers should be objective, manifestly unbiased, non-partisan and reconciliatory.

Ikoli, who spoke on “Entrenching Grassroot Security And Peace In The South-South Region During And After The 2023 General Elections,” noted that traditional rulers should recognise who they were and what they represented, adding that they should see themselves as equal stakeholders in the quest towards achieving enduring peace and security in the region.

“Our royal fathers are, by reason of their position, the father of their subjects, regardless of the age and credential of the subjects. Thus, they are in a natural position to serve as adjudicators and mediators when there are conflicts.

“By so doing, they will help with the quick resolution of conflicts before they degenerate into larger conflicts that can engulf the entire nation,” he stated.

Earlier in his welcome address, Chairman of South-South Monarchs Forum and the Amanyanabo of Nembe Kingdom, King Dr. Edmund Daukoru, Mingi XII, had said that the overall goal of the meeting was to entrench sustainable peace before, during and after the 2023 general elections in the region.

Daukoru harped on the need for security agencies in the country to take security issues very seriously, noting that the nation has matters of security concern far more serious in the country, even as he sued that all hands should be on deck to ensure that the country has a violent free elections.

In his remarks, the Chairman of Bayelsa State Council of Traditional Rulers and the Ebenanaowei of Ekpetiama, HRM, King Burabaye Dakolo, affirmed that traditional rulers have roles to play in ensuring peace and security in their domains.

As critical stakeholders, he said, we cannot afford to be victims of election induced violence, adding that the monarchs have great roles to play as the custodians of the peoples culture and tradition.

In his goodwill message, former Governor of Adamawa State, Mr Boni Haruna, commended the organisers of the programme for deeming it fit to mobilise effort towards ensuring a peaceful polls in the region and to a very large extent, in the country.

He harped on the need for a robust and sustained partnership between the government and traditional institution so as to promote peace and unity in the country.