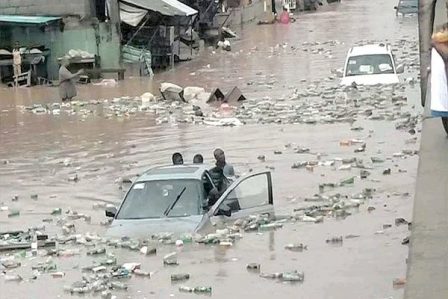 The Minister of Water Resources, Engr. Suleiman Adamu has disclosed that about 445 Local Government Areas across, 32 States in the Federation and the Federal Capital Territory (FCT), will witness heavy flooding during the 2022 rainy season.

The minister spoke while he was unveiling the 2022 annual flood outlook put together by the Nigeria Hydrological Services Agency, said 233 local government areas, in 32 States are at the risk of what he described as a highly probably flood risk. He also disclosed that 212 other local government areas are at risk of moderate flooding during the year.

He said, eight states including; Rivers, Bayelsa, Cross Rivers, Edo, Lagos, Delta, Imo, and Ogun State, will experience coastal flooding during the year, due to the rise in sea level and tidal surge. This he said, will have an impact on fishing, wildlife habitation, and river navigation. The minister further disclosed that urban flooding will be witnessed in Lagos State, Kaduna, Port Harcourt, Gombe, Suleja, Benin, Asaba, and Lokoja, among other cities in the country.

The Minister did well to inform Nigerians of what lies ahead, even as the rainy season is already here.